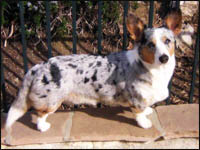 Ch. McKay's We Hit the Jackpot NA NAJ HIC +2/3 OAJ (Jackson) is my first show dog. He was born March 23, 2003. He by Icon's Tobias McKay out of Icon's Darby of Oakie Acres. He finished his championship on May 29th, 2004, just a few days after his 14 month birthday. He is now training in agility, and has his Novice titles. He will be trialed extensively in agility this summer, and maybe step into the Rally-O ring.

Jackson is a wonderful dog. He is friendly, out-going, loves all people, and is just a pleasure to be around. 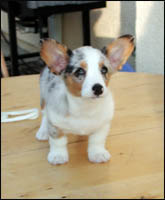 We couldn't be any happier with him. He has a bit of an independent streak, but that doesn't stop him. We are looking forward to placing titles on the both ends of his name. My dream for him is to become a Therapy dog. We also hope to try herding and agility now that he is finished. He has already been instinct tested and we hope to start lessons in a few weeks. The HIC after his name shows that we was Herding Instinct Certified. Jackson has his NAJ (Novice Agility Jumpers with Weaves) title, which he got on 11/27/04. He has two legs of his NA title. We have started Rally training, and Jackson has a nice solid "Front", and around to heel position.